Conflicts and inner tensions are a big challenge for groups and societies – people are afraid of relationships breaking apart, the intense emotions of fear, anger or guilt and the escalating violence, be it psychologically or even physically. At the same time we know we can’t get rid of conflicts, as they seem to lie in humans nature, arising out of our tendency to fight – about resources, identities, religious beliefs –  against the different, unknown, feared „out there“ – to be seen, heared, acknowledged.

In Berlin over 300 people met in a large group workshop „Sacred Creative Space for Conflict and Peace“ to explore how out of the mess of nowadays big conflict fields, such as poverty, extre 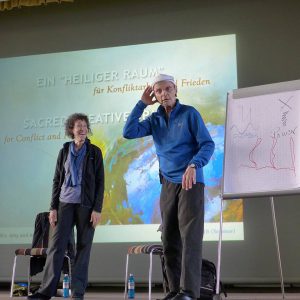 mism, ecological breakdown, creative solutions can emerge. The framework for this attempt is Process Work brought into being by Amy and Arny Mindell. It’s a transformational approach that integrates psychological, scientific and spiritual worldviews and practices. Experience and reality are multidimensional – people are not just rational beings, but deeply moved by emotions, dreams, beliefs and values that derive out of their biography and culture.

To explore those deeper aspects it’s necessary to look at conflicts not just as something „out there, bothering and attacking me“, but also as a „part of me“. What I’m fighting against is also an aspect of my reality, that needs to be recognized and integrated. Conflict resolution is not just about negotiating and dealing with differences, but a practice of empathizing and creating new relationships – both within and between human beings. Often surprisingly at the very core of a conflict lies a sacred space of healing and creativity, that reveals itself when we transcend the polarities and get in contact with a larger context and space that connects them all. Out of this awareness totally unknown and new solutions can emerge that no one thought of before. This is a requires an inner movement from fighting to exploring to letting go.

Finally no solution is going to last forever, it’s a temporarily phase – everything changes – after a conflict is before a conflict – with a chance of having moved foreward one step in an evolutionary development.

The creative space of conflict and peace